What is innovation management?

Innovation management software is designed to help companies ideate, filter, prioritize, validate and commercialize new products, services, business models and other innovations. One of the simplest descriptions of innovation management is the application of the scientific method to innovation. It has historically been employed mostly within large enterprise, but is increasingly being utilized within entrepreneurial startup teams as well. This page is a comprehensive guide to understanding the broader landscape of the innovation management discipline and the software tools available within it. There are many buzzwords thrown around in the field of innovation management and this post will help explain the most important concepts and how they relate to one another.

Proactive innovation management was set on its current path in the 1930s by Joseph Schumpeter, an Austrian economist who identified innovation as a key component of economic growth. It first shows up on the helpful Innovation Management Theory Map in the 1950s with the Ansoff Matrix. Some of this theory came out of the Shewhart Cycle of Plan-Do-Study-Act (PDSA) and the Pareto principle, which W. Edward Deming and Joseph Juran expanded on as they introduced Total Quality Management systems in Japan. This led to the Toyota Production System and Toyota Way that gained popularity, and really picked up steam in the 1990s with big corporations like GE, Intuit, and others, and the emergence of Six Sigma process improvement.

Application of Lean and Innovation Management theories spread to many other industries in the form of Stage-Gate, Waterfall Development, Lean Construction, and many others. With the rapid growth in popularity of agile software development in the 2000s, set against the backdrop of the new digital era, innovation management evolved into what we know it as today. 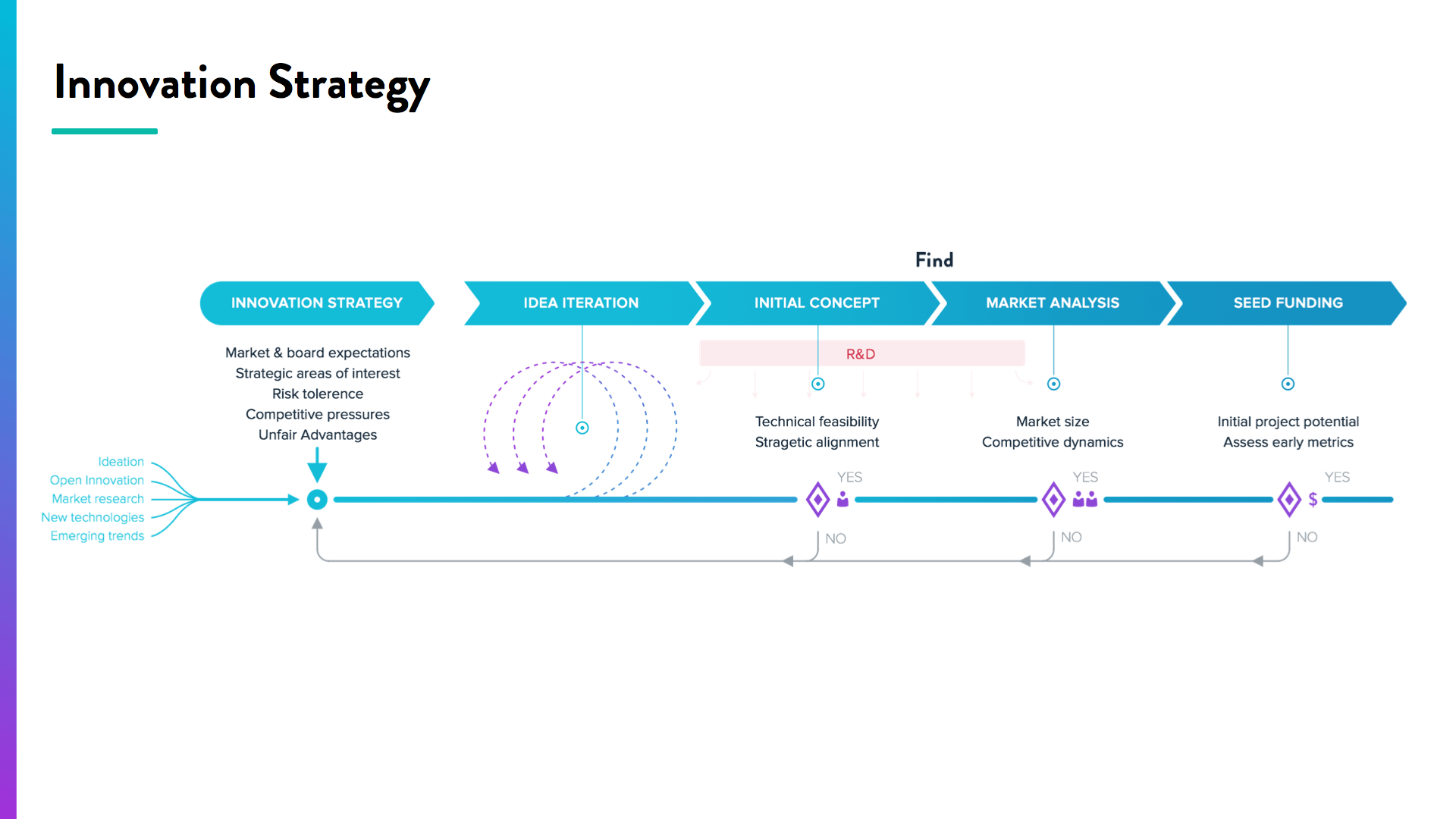 Some major common threads amongst the most popular modern approaches are:

Now that we've laid out the basics, the following section will summarize some of the most popular and recurring concepts within the field.

Modern companies often categorize their innovation efforts into what has become known as the Horizons of Innovation. This framework was developed by Mehdrad Baghai, Steve Coley, and David White at McKinsey, and published in their book “The Alchemy of Growth”

The Three Horizons are:

This is a strategic framework to help orient and calibrate the ambition of innovation efforts. It also helps the company think about how best to incubate the project. For example, a Horizon 1 project might be best shepherded within the most relevant business unit, whereas a Horizon 2 project need a more a cross-functional team from multiple BUs. Horizon 3 innovations are so far away from the core business that they are sometimes pursued by combinations of innovators from inside the company and entrepreneurs from outside the company within an internal accelerator or skunkworks type program.

Agile Development is a method of software development that came into its own in the early 2000s with the publication of the Manifesto for Agile Software Development. Customer centricity is a core tenet. As the name would suggest, it is meant to increase software development agility, by making teams more receptive to changing market demands and more oriented towards lightweight development techniques. It emphasizes the use of cross-disciplinary, self-directed team structures. 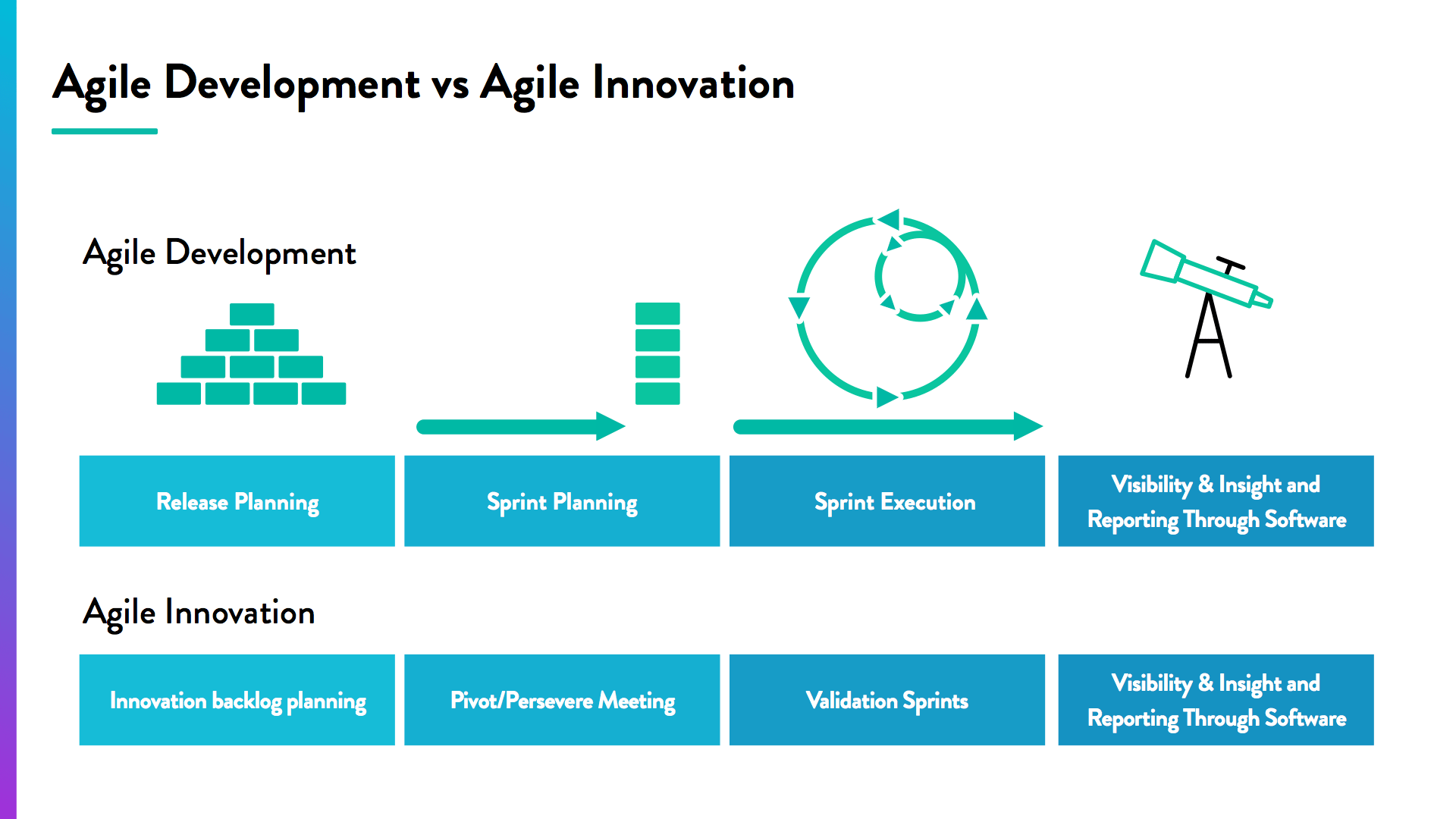 Design thinking began with designers, but has since been used much more broadly in business and even non-profit management, the arts, and social entrepreneurship. It is based on studying problems and existing user interactions, and ultimately trying to produce better solutions. The main phases of a design thinking approach are: empathize, define, ideate, prototype, and test. If it sounds similar to agile development and lean startup, you're not alone. They are very similar methodologies. The major difference is that they are typically applied at different stages of solution definition and delivery.

Perhaps the simplest way to visualize how design thinking, lean and agile fit together is this great little graphic:

Six Sigma is all about process improvement and was initially developed by Bill Smith while working as an engineer at Motorola in the mid-1980s. It was famously made a part of Jack Welch's strategy in the mid-1990s while he was the CEO of GE. The approach focuses on improving output quality by reducing variability in production and addressing the root cause of defects.

More recently, many companies have blended Six Sigma concepts with lean manufacturing concepts to create what's now called Lean Six Sigma, used by some of the first large adopters of Six Sigma, like GE and IBM.

As mentioned above, Eric Ries is credited with popularizing the Lean Startup movement, which is greatly influenced by the Agile Development approach, with his book “The Lean Startup.” Core tenets include shortened feedback loops, improved success indicators, risk mitigation, speed and agility. Lean Startup uses tools like the Business Model Canvas and the Lean canvas which are simplified strategy visualizations to help innovators and entrepreneurs understand the major strategic considerations and sources of advantage. Armed with this knowledge, a team can hone the business model more effectively as they begin to collect real market feedback on early prototypes or minimal viable products. In turn, this will allow them to make important “pivot or persevere” decisions.

Here's the standard setup of the Business Model Canvas: 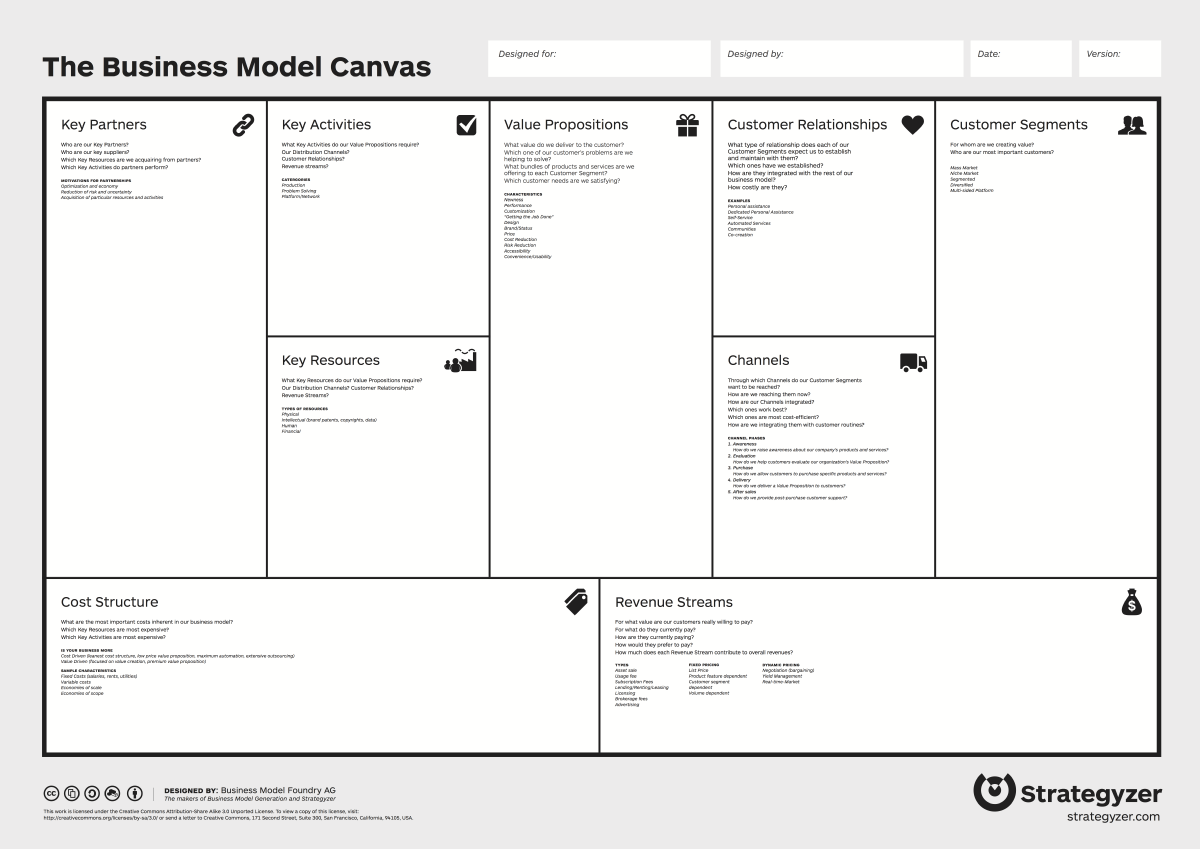 Here's what the customizable canvas functionality looks like in GLIDR: 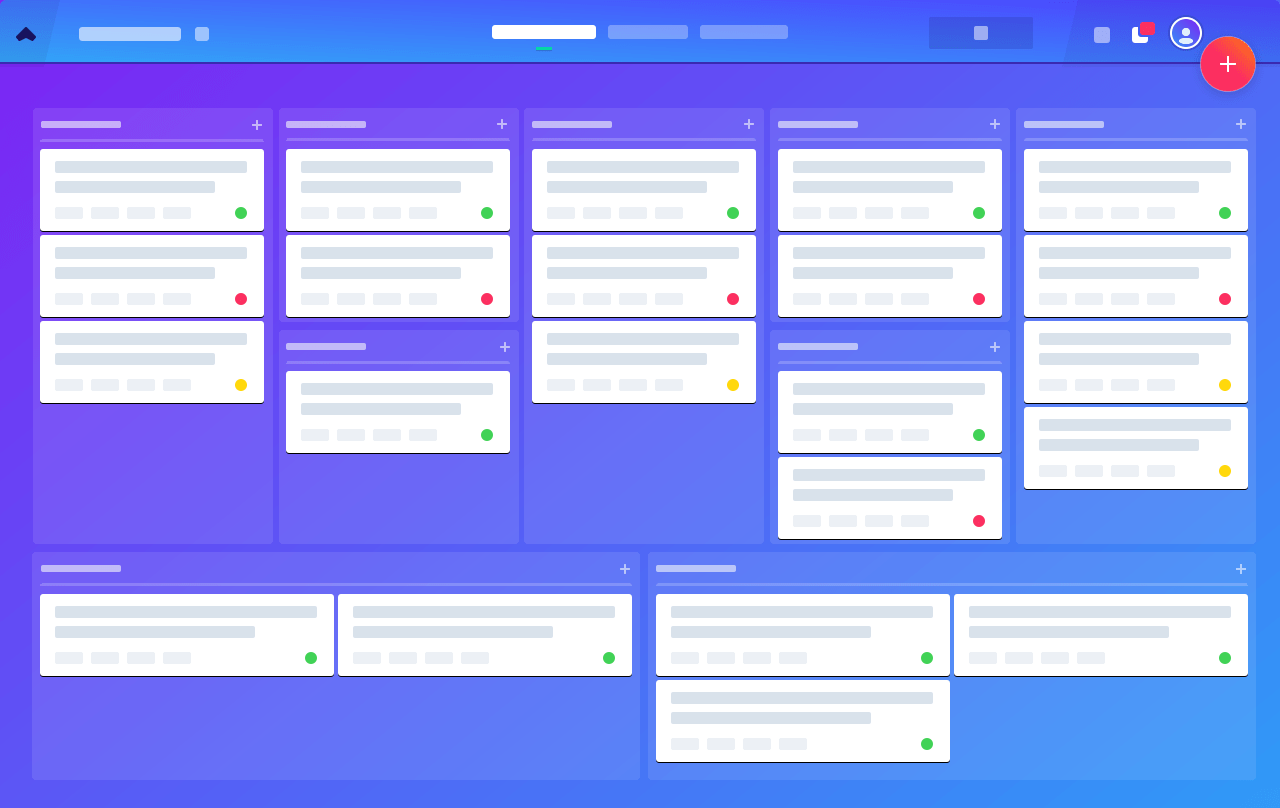 The Build/Measure/Loop is another well-known concept central to Lean Startup. It emphasizes shortened feedback loops with continuous improvement. Reis talks about the importance of using better “innovation accounting” systems which track the right key performance indicators. Those improved KPIs can help teams get more reliable signals earlier on, which they can use to iteratively improve the product.

Open Innovation is another relatively recent concept which seeks to make at least certain elements of valuable intellectual property public instead of private. It is often used by non-profit institutions in order to further R&D in the public interest, or by for-profit companies to facilitate the development of nascent industries, as in the case of Tesla.

UC Berkeley professor Henry Chesborough, who leads the Center for Open Innovation, is credited with coining the term “open innovation”.

Some quick examples of open innovation:

In June of 2014, CEO Elon Musk wrote a blog post announcing that “Tesla will not initiate patent lawsuits against anyone who, in good faith, wants to use our technology.” The primary driver of this strategy (no pun intended) was Tesla's desire to support the entire electric vehicle ecosystem.

GE is embracing open innovation with examples like their now 13 year old Ecomagination effort. Their stated goal is to create a network effect to help solve some of the world's most pressing problems related to climate change.

Linux is a famous example of open innovation administered by a non-profit foundation. Linux is open-source operating system software that anyone can use for free. It has even become the basis for Google's Chrome operating system.

The innovation management software landscape has developed unevenly. To-date, tools are concentrated on either the early ideation side of the innovation lifecycle, or the more mainstream execution process. The discovery, incubation and commercialization part of the lifecycle is more fragmented.

The interesting part about this uneven development is that most corporate innovation failures as well as entrepreneurial failures trace the roots of failure back to building a tool that nobody wants and/or flawed execution. Lack of ideas for potential innovations to commercialize is not a common pain point. Yet, that's where most of today's software tools concentrate. 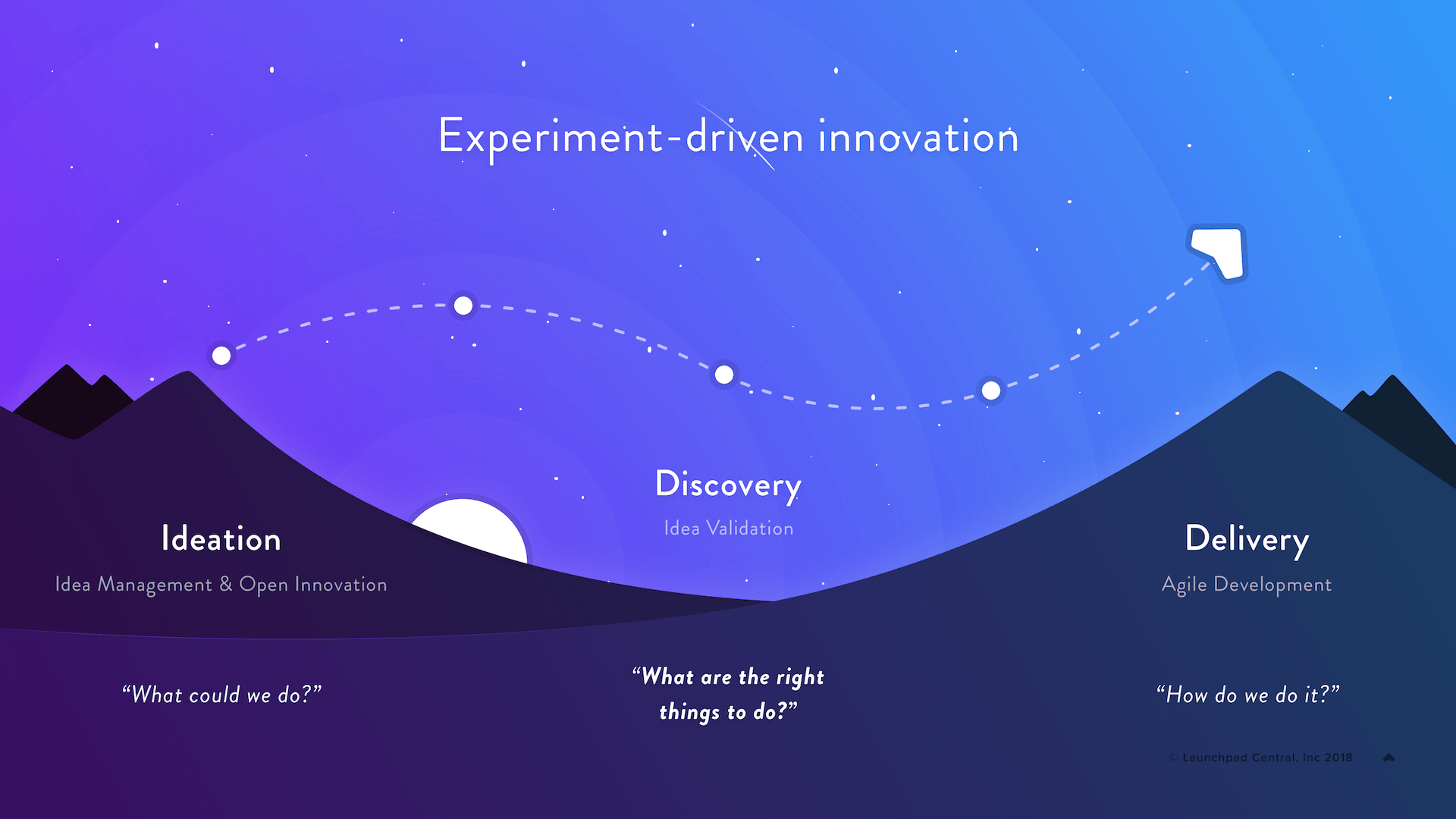 There is a world of great tools for the execution and delivery stage of a product, but most companies, large and small, still use a confusing mashup of spreadsheets, email, and other documents to manage and track innovation projects through the discovery and validation phase.

There are many complementary spaces that are often more crowded, such as:

GLIDR is an idea validation platform. We help great ideas avoid the valley of death...the gap between ideation and successful go-to-market. By focusing on the idea incubation and commercialization phase, we bridge that gap. Ultimately, GLIDR helps companies bring better products and services to market. Get a free trial of GLIDR for your team today by entering your email on our homepage.

How GLIDR is Used

Teams from institutions large and small, both for-profit and non-profit, use GLIDR to validate their ideas and their business models. GLIDR is built upon the lean startup methodology of shortening feedback loops through iterative experimentation, and helping teams capture insights during the Discovery phase of bringing a new product to market. Innovators and product managers can more quickly arrive at a better Minimum Viable Product and a more attractive business model. For a comparison of GLIDR Team edition versus GLIDR Enterprise, check our pricing page.

GLIDR helps teams capture and prioritize their assumptions about an idea, run research and experiments to test those assumptions, and pull key insights from the evidence that comes back to drive smarter decisions. This process helps them replace subjective guesswork from within their company, with evidence-driven market signals. Learn more about GLIDR's core features here.

In larger companies that use an idea management tools like Spigit, HYPE Innovation or BrightIdea, they would typically capture lots of ideas from within their company, which then get filtered down to a few ideas that have the most promise based on the insight from their internal crowd. The next step is to put those ideas through a validation process with GLIDR, and identify which ones to bring to market and in what form based on the evidence from outside the company. 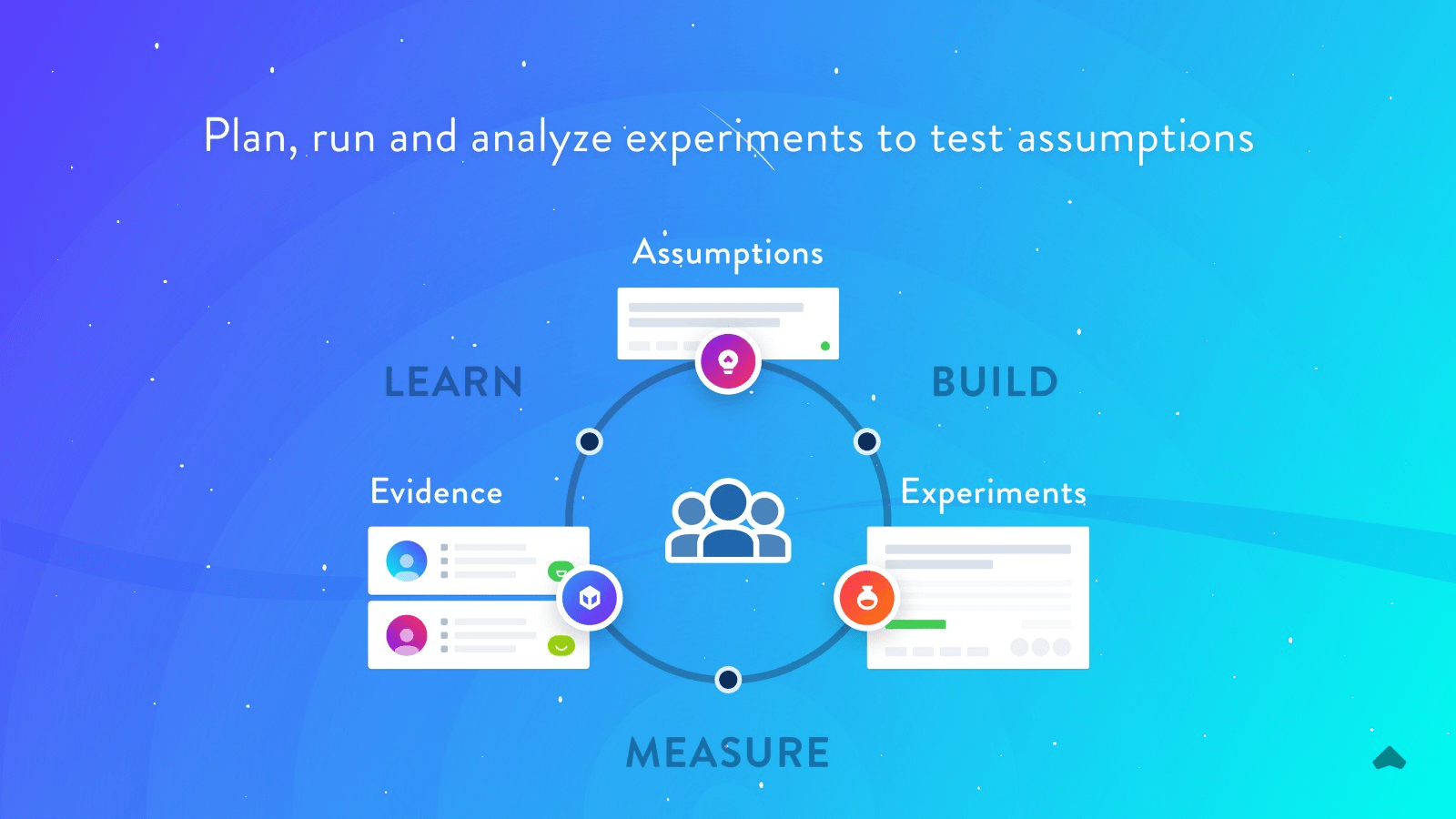 What Does the Future Hold?

Machine learning and predictive analytics will enable better pattern recognition, which will allow for higher confidence levels that a given idea will succeed. Innovation technology will also be able to proactively show the innovation team when their validation processes are over- or under-performing global, sector-specific, or more granular benchmarks.

User testing will continue to evolve, as evidenced by cases like Facebook's recent launch of Sapienz. The ability to directly and quickly access real markets with prototypes will help companies continue to de-risk their ideas. Indiegogo is a great example of this: https://enterprise.indiegogo.com/

Talent marketplaces will allow companies to fill out their teams with subject matter experts and resources that they just cannot sustain inside their own organizations. This will allow them to crowdsource or gig-economy the best-suited resources for the job they need done.

The Startup Way by Eric Ries

Lean Startup in 5 Minutes (or Less)

Customer vs Product Development - How to Build a Startup

Did you find this page helpful? Let us know how we can make it better.

Get a free trial for your team today. Just enter your email on our homepage. No credit card required for the trial.

We use cookies in order to serve you a better customer experience, for analytics, and for marketing campaigns. For more information please see our Cookies Policy. Do you accept the use of these cookies?